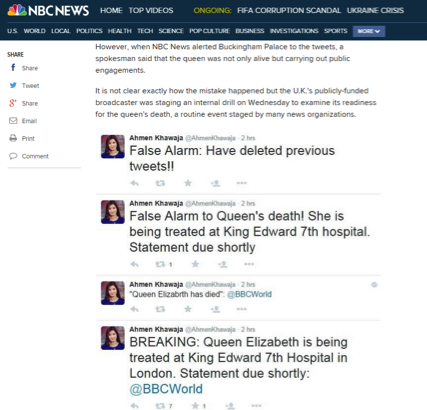 08 Jun The Queen is NOT dead

We look at Twitter’s risks and opportunities.

The perils of Twitter were highlighted once again with the BBC’s recent, unexpected, and untrue (please don’t make this go viral for the wrong reasons) announcement of the Queen’s death.

I have to be honest. I did think “thank goodness it wasn’t me” who had pressed ‘tweet’ with that bombshell. But the fact is, a tweet, although possibly not as jaw-dropping, can be very easy to send.

The attraction of Twitter is that it’s fast – almost immediate – and has a lot of information from a range of sources. When news is breaking, it’s an instant way for journalists to get the story to an audience, in 40 characters or less of course.

But when the pressure is on and your fingers don’t move as fast as your brain thinks they do, slip ups can, and do, occur.

A broadcaster recently tweeted that jobs were to be cut at a New Zealand energy sector company, when it was in fact an international asset management business.

When tweets go wrong, the consequences can be far-reaching. I’m not sure which company this particular tweet was worse for, but if I was an employee I would have been pretty unhappy to learn of my impending redundancy on Twitter.

The BBC example also reiterates that even when incorrect tweets are discovered and deleted by the original tweeter, the issue is often already out of their hands. American news channel NBC had a screen shot of the tweets already sent… and the faux pas was rapidly on its way to becoming an internationally trending topic.

Twitter can be risky place, but choosing to stay out of that world means you could miss out on significant customer engagement. Putting protocols in place for staff and for your regular Twitter contributors can help reduce and, if necessary, manage mishaps.

It could even save you falling victim to a tweet that is startling for all the wrong reasons.