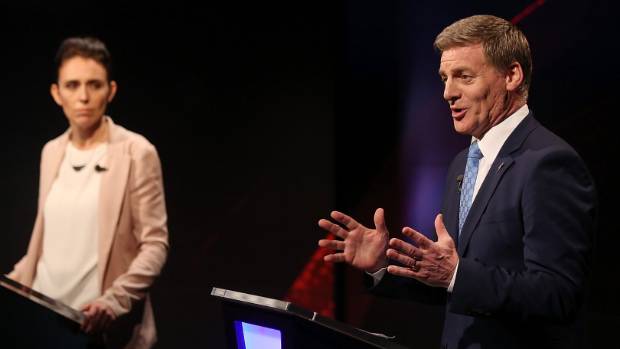 Last night’s leadership debate provided the first televised head-to-head showdown between the two major party leaders wanting to lead our country.  Our Senior Consultant Yannis Naumann shares his thoughts on how they performed and the challenge ahead for the National Party.

The tempo exercised by TVNZ moderator and unabashed National fan Mike Hosking certainly helped, but Mr English’s advisers would have been satisfied that he hit all his talking points – strong economic management, less tax, an experienced and safe pair of hands, in-depth policy knowledge, a balanced approach to economic growth and environmental protection, backing New Zealanders and so on.

It was a reminder of what had made Mr English such a credited Finance Minister in recent years.

He even managed to appear less wooden than expected (after some initial awkwardness) and surprisingly scored the night’s biggest zinger with his quip that “voters can’t spend your values at the supermarket.”

A young family in Auckland doesn’t want to hear Mr English explaining the drivers of the economy or how National has done a great job getting building consents up. They want somebody to admit things aren’t working, and reassurance that more affordable housing is on its way.

We’re seeing that with Labour now surging ahead in the latest polling on the back of the rise and rise of Jacinda-rella.

In Ms Ardern, Labour has a young, vibrant, charismatic leader who is engaging the masses with her “relentless positivity” (remind anybody else of 2008 and some guy called John Key?).

Her campaign – “Let’s Do This” – is a call to action and signals to voters that she’ll be there working WITH them to fix the country’s problems.

Ms Ardern is also doing a very clever job reminding voters that because she’s only been in the job for a few weeks, she probably deserves a break on some of the tougher policy-related questions.

Labour aren’t home just yet though.

Too often last night Ms Ardern was forced to provide platitudes rather than a serious answer around how Labour will tackle the challenges they’ve identified. Her Deputy, Kelvin Davis, also floundered on tax policy on this morning’s AM Show with Duncan Garner.

If National wants to arrest the momentum Labour has, that’s where they need to go.

Their chances hinge on denting Ms Ardern’s personal popularity. It’s about demonstrating that Ms Ardern simply saying she’s being “clear and transparent” isn’t providing an answer to the public as to what she’ll do as Prime Minister.

Going dark and playing the fear card is a big call, particularly for a third-term government.

And perhaps most concerningly for National, even if they do go negative, will anybody really be listening anymore?